Rafaqat Ali Khan
Back to products

Asif Ali Santoo Khan was born in 1973 as the youngest son of Manzoor Hussain, a famous vocalist from a prominent Pakistani musical family. His musical lineage dates back more than 350 years. Mian Maula Baksh, his great-grandfather, was one of the most renowned classical singers of the Indian subcontinent and started his qawwali (Sufi music) group over eighty years ago.

His grandfather, Santoo Khan, moved the family to Pakistan in 1947, residing in Lahore following the split. Here, the group, known at the time as Santoo Khan Qawwal, rose to prominence due to its extensive repertoire of classical, spiritual (Sufi), and popular songs, as well as its exceptional mastery of Urdu, Persian, and Punjabi. The ensemble was one of the first to record qawwali music, and their recordings were frequently broadcast on All Pakistan Radio. 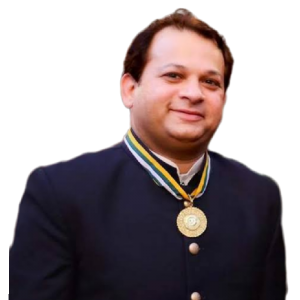 If the late great Nusrat Fateh Ali Khan was known as “the emperor of qawwali,” then Asif, previously recognized as one of the maestro’s finest students, has unquestionably become the music’s ruling prince. Since Nusrat died in 1997, Asif has performed in tribute concerts and recorded albums in his teacher’s honor, but he has established his style and personality. While maintaining accurate to the glorious traditions of the devotional Sufi music known as Qawwali, Asif is enormously popular in his native Pakistan and a formidable force in the global arena. His music can range from peaceful and trance-inducing to thrilling. Hearing his voice soar above the call-and-response choruses, rhythmic hand claps, percussion, and harmonium of his accompanying musicians are uplifting, regardless of one’s Sufi beliefs.

In 1988, Ustad Santoo Khan passed away at the age of 120. This was a tragic event. When Asif made the next step toward becoming Ustad Nusrat Fateh Khan’s student, Ustad Nusrat Fateh Ali Khan again paid his respects by paying a visit. As a result of his teacher’s respect for his lineage and Asif Ali’s great desire to study extreme classical music, Asif Ali was placed in a tight relationship with his master.

In addition to receiving instruction from Ustad Nusrat Fateh Ali Khan, Santoo is also under the tutelage of his father, Manzoor Hussain. The latter has studied linguistics in Arabic, Persian, Urdu, and Punjabi, in addition to Islamic law and Hadeeth Shareef (the sayings of the Prophet Muhammad, PBUH), as well as the incorporation and transmission of factual knowledge into Qawwali. This singular fusion sets Santoo apart from other artists in his field in a meaningful way.

Asif Ali Santoo Khan is an excellent catch for live concerts, weddings, and other events to have as a caller. He is an expert in the musical spells that, when cast, will revitalize the gathering by infusing it with his songs’ joyous and pulsating tunes. To elaborate further on his performances, we would say he is very composed.

Only citizens or permanent residents of Pakistan are eligible to receive Pakistan’s top national literary honor, the Pride of Performance Award. Nevertheless, it is available to recipients not just from Pakistan but also from other nations so long as they have made substantial contributions to the literary canon of Pakistan.

Here is the list of his songs From his Albums (Year-wise):

How To Book Asif Ali Santoo Khan For Events?

Asif Ali Santoo is available for Evens and Concerts and is very easy to be approached and Booked for Events with Fankar Online.

How much does Asif Ali Santoo charge for a show?

Male Singers
Ahmed Jahanzaib is pop singer and composer. Ahmed Jahanzaib is one of the few singers of the country, who have been trained in classical music that  is why he mostly sings soul stirring slow songs. Ahmed popular of heart touch voice. he is play back singing of dramas.
Read more

Male Singers, Ghazal
Ghulam Ali is Pakistani ghazal singer of the patiala gharana.Ghulam Ali is considered to be one of the best ghazal singers of his era. he is highly popular in Pakistan India Bangladesh. Ghulam Ali composes music for his bhajans. One of his ghazal 'Hum ko kis ke gham ne mara' is most famous.
Read more

Male Singers, Bands
Ali Azmat is song writer and musician and actor. He is best known as the lead singer for the influential sufi rock band junoon and for his subsequent solo career. In 2001, he became the first musician ever to perform at the United Nations General Assembly along with an Indian band choosing to sing his song "Dosti'. junoon is very first song which is hit in the album.
Read more
close