Rizwan Muazzam Qawal is a Pakistan based Qawwali group, headed by Nusrat Fateh Ali Khan’s nephews, Rizwan and Moazzam.
Both of them, Rizwan and Moazzam are the sons of Mujahid Mubarak Ali Khan, they have been performing together as Rizwan-Muazzam Qawwali Group since the late 1990s.

Rizwan Muazzam Qawwal, a new youthful ensemble from Pakistan, are already proven to be masters of this Sufi devotional music while in their teens. Rizwan Mujahid Ali Khan and his brother Muazzam Mujahid Ali Khan have a stellar musical history.

Qawwali music was first presented to Western audiences by the late Nusrat Fateh Ali Khan (1948-1997). His music was universally understood and appreciated because it effortlessly crossed linguistic and cultural boundaries. These days, Qawwali is recognized as one of the world’s most emotional and exciting musical styles.

Mubarak Ali and Fateh Ali, their grandfathers, were well-known qawwals. Their father played music. They were born to play music. In 1992, when Rizwan and Muazzam were 11 and 9, their father, Mujahid Khan, started teaching them music. Sad to say, their training was cut short. Their father died only three years into their talim.

After Mujahid’s death, their late Uncle cared for the singers, which was very important for their growth. Nusrat Fateh Ali Khan, a Sufi legend, was the first person they learned from. Muazzam said on Pakistan TV that “their Gharana is known for not taking students who are direct descendants of the Ustad.” So, the fact that they could learn from their father and Uncle was pretty amazing. They became close to Nusrat almost right away. Because of bad luck, they only spent a year with their Uncle before he died too soon.

When the famous qawwali singer Nusrat Fateh Ali Khan died in Pakistan in 1997, he left a hole in the music scene filled by his two teenage nephews, Rizwan Mujahid Ali Khan and Muazzam Mujahid Ali Khan. Even though they were very young, they were determined for their group to carry on their Uncle’s efforts to break down cultural, linguistic, and religious barriers and bring the devotional but lively Qawwali vocal music of the Sufi mystics of the Islam religion to the rest of the world.

These Nusrat Fateh Ali Khan nephews come from a line of Qawwali singers that goes back more than 500 years. Their creative reinventions of spiritual love songs based on classical Islamic and Sufi texts were first shown in the UK at the WOMAD Festival in Reading in July 1998, where they got a lot of praise from critics.

Rizwan-Muazzam Qawwali comprises two lead singers, Rizwan and Muazzam, five secondary singers who lead the choral response and hand clapping, two harmonium players, and a tabla player. They traditionally perform Qawwali, which means they sit on the ground instead of on seats. They think this brings them closer to God. Last year, one critic called them “the Qawwali Clash,” only half in jest because of how intense their songs and stage show were. 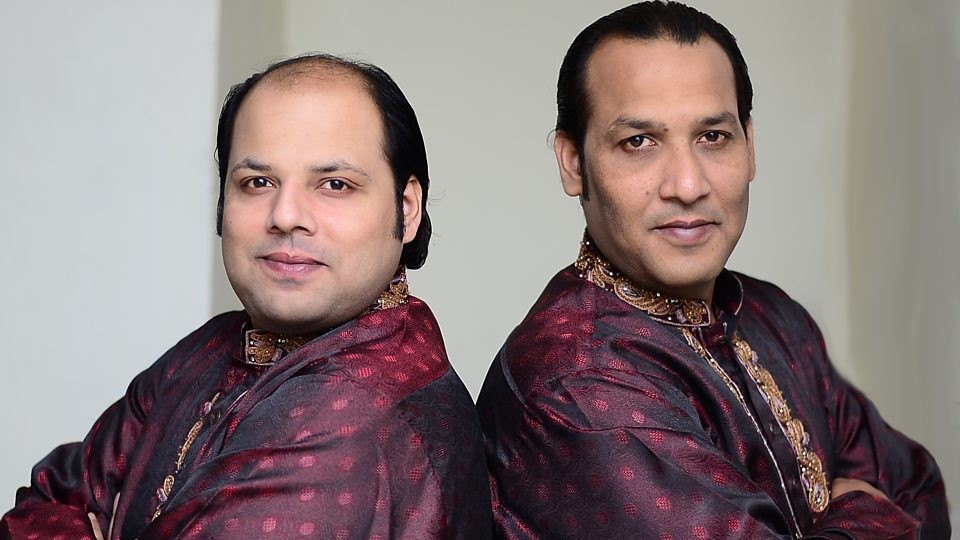 Rizwan-Muazzam Qawali Group is made up of two lead singing brothers (Rizwan and Muazzam), five secondary singers leading the choral response with vigorous hand clapping, two harmonium players and a tabla player. They perform in traditional Qawwali style – sitting on the ground rather than on seats – which they believe brings them closer to God.  They have given many joint performances at the Coke Studio in Pakistan in collaboration with various other fellow musicians including Shazia Manzoor that became very popular in Pakistan.

Their Uncle gave them ideas for the album People’s Cology #1, which they made with Count Dubulah (also known as Temple of Sound) and Neil Sparkes. Nusrat and Michael Brooks did a great job blending sounds from the modern world with qawwali music and instruments (predominantly harmonium and tabla). In the same way, Rizwan Muazzam’s nephews were seen and heard by many important people outside of Pakistan because of this project.

Tu Kuja Man Kuja (initially written by Nusrat/Farrukh), a different version of Allah Hoo, and Jogi (Coke Studio Pakistan) are some of their other best songs.

The legendary duo sings unlimited songs. Some of them are listed here:

Rizwan Muazzam qawwal is doing shows, events and concerts all over the world.  It’s very easy to be approached and Booked for Events with Fankar Online.

How much does Rizwan Muazzam charge for a show?

Male Singers, Qawwals
Rafaqat Ali Khan belongs to family of veteran classical musicians and  son of legendary singer Nazakat Ali Khan and nephew of Salamat Ali Khan of Sham Chaurasia gharana. He started singing solo and did shows in countries like India, UK, USA, UAE, Canada, Australia, Middle East and many European countries. His 2009 tour of USA was considered the most successful tour ever of a Pakistani artist.
Read more

Qawwals
Fareed Ayaz Qawwal, originally from Pakistan, are renowned for their devotional qawwali worldwide. They are a member of the Delhi
Read more
close