Abida Parveen
Back to products

Arif Lohar is popular  folk singer in Pakistan he is visited more than 50 countries. Arif Lohar is also a play back singer. He has also sung in multiple Punjabi Films in Pakistan and India. his participation in coke studio can build their name. Arif Lohar awarded the Pride of performance by the government of Pakistan.

Arif Lohar is a famous Punjabi singer and musician from Pakistan. He is renowned for his use of traditional instruments in his performances. As such, he represents the Punjabi people and their rich folk culture.

Arif has a big heart and has donated to many causes to help those in need. Over the past two decades, acclaimed vocalist Arif Lohar has performed on more than 50 international tours throughout the United States, the United Kingdom, and the United Arab Emirates.

At this point, he is generally agreed upon as among the best folk and Sufi musicians in the world. Lohar has released over 150 studio albums and recorded over 3000 songs, the vast majority of which are sung in Punjabi.

On September 1, 1966, Arif entered this world in the province of Punjab, Pakistan. Arif Lohar is the son of the legendary Pakistani folk singer “Alam Lohar.” Every one of his seven brothers now calls the United Kingdom home. He is the only one still living in Pakistan with his family among his father’s eight sons. In his earliest memories, Arif Lohar can be found singing alongside his father.

He is still working hard to keep these intriguing customs alive and to take this art form to new heights. When it came to music, he was an advocate for both recent trends and cherished classics. Arif, decked up in a dhoti kurta and holding a pair of tongs, fuses contemporary sound with traditional form.

When his album “21st Century Jungi” was published in 2006, he became a massive star in the Punjabi music industry. Almost a million people saw him perform at the Asian Games in China opening ceremonies in 2004. 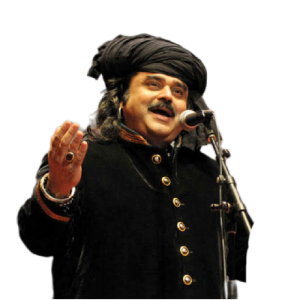 In 2010, on season 3 of Coke Studio, he performed his hit song “Jungi” with a then-up-and-coming vocalist named Meesha Shafi. Another one of his songs, “Alif Allah Chambey Dey Booti,” was a huge hit all over the world. Song “Jugni” is also featured in the film “Cocktail,” directed by Bollywood actor Saif Ali Khan.

In addition to ‘Diary of a Butterfly,’ several Indian films have incorporated renditions of ‘Jugni. In 2013, Arif Lahore also contributed his talents to the soundtrack of the Bollywood film Bhaag Milkha Bhaag.

Arif Lohar, a world-renowned folk singer, has starred in many Punjabi films and contributed three songs to the soundtrack of Syed Noor’s Jugni (2012), the highest-grossing movie in Pakistan in that year.

Awards and Achievements of Arif Lohar

In 2005, the Pakistani government honored Lohar’s achievements by bestowing him the Pride of Performance Award.

Arif Lohar is doing shows, events and concerts all over the world.  It’s very easy to be approached and Booked for Events with Fankar Online.

How much does Arif Lohar charge for a show?

Male Singers
Jawad Ahmed is well known Pakistani singer. he  sing a song in different dimensions ROCK,POP and Sufi (Allah meray dill k andr) but also a Patriotic (O meray yar). He is not only singer but also a prouder a good music in industry. Jawad the first having a Sufi tinge and second being somewhat commercial oriented.
Read more

Male Singers, Folk Singers
Ataullah khan Esakhelvi is pakistani award wining musician from iskheail Mianwali Punjab. he not only sing in punjabi and urdu he sing in searaki. Attaullah's hits include Qameez Teri Kaali,  the government of Pakistan is awarded him to pride of perfomance award. he recorded four albums. evenly he released album in UK.
Read more