Ahmed Jahanzaib
Back to products

Qurat-ul-ain is singer, musician, composer, and actress. She is a shine star at international level. QB is sings in pop progressive rock and folk. QB is play back singer of drams songs with actively played. Her song is
“Wo humsafar tha” is most popular in songs list.

Qurat Ul Ain Balouch is a vocalist and songwriter from Pakistan. A well-known Pakistani artist is known as “QB” or The Humsafar Girl. QB has some powerful vocals, even though she has yet to have formal training and doesn’t have a song with a musical core. Sufi performers like Nusrat Fateh Ali Khan, Reshma, Muhammad Juman, Pathanay Khan, and Abida Parveen, among others, strongly influenced her.

Despite being an American citizen, she was raised in Pakistan. She was born in Iran to a Persian father and a Pakistani mother as her parents. She was on a mission to improve Pakistan’s music business when she returned from the US a year ago. After covering songs like “Akhiyan Nu Rehn de” and “Maaya Ni Main Kinu,” she rose to prominence by performing the theme song for the drama series “Humsafar,” which had more than 8.5 million views on YouTube in only six months.

Qurat Ul Ain Balouch is Pakistani Female Singer, musician, composer, and actress. She shines in international level. QB sings in pop progressive rock and folk. QB is a playback singer of drams songs with actively played. her song is ‘Wo Humsafar Tha’ is most popular in songs list.

She was born on March 4th, 1988, in Iran, under the sign of Pisces. She is a Muslim, though, and Multan is where she was born. Quratulain Balouch is her full name, yet she also goes by the moniker QB. She began her formal education there in Multan at Kehkashan Army Public School. She discovered she has a good voice and is in tune when reciting naats in assemblies. In Pakistan, she later completed her FSC and graduated from George Mason University in Washington, DC, with a single men’s degree in IT basics and Multimedia.

Ghulam Abbas Haider, the father of QB, is a retired Pakistani Army officer. Sumaira Iqbal, her mother, works as a banker. Her mother was a Multani, while her father was Persian. She did not come from a musical or vocally talented household. Her passion and innate gift for singing propelled her to new heights. She chose to pursue singing when she was just 12 years old. She struggled for years before becoming well-known in the field.

She rose to fame because of the HumTv drama Woh Humsafar Tha’s OST. She has gained much recognition and propelled herself into the spotlight thanks to her singing voice and vocalizing style for the television programmed “Humsafar,” which stars Mahira Khan and Fawad Khan.

Although not her main strength, Sufi Folk is her passion. Qb is equally adept at performing covers of songs by Adele, the Cranberries, Kailash Kher, and a few other artists. She appeared in the 2011 PFDC L’Oreal Bridal Fashion Week and the Bridal Couture Week, where she stole the show by singing “Akhiyan Nu Rehn De”.

In 2017, Quratulain Balouch sent her spokesperson to the Hindi film industry. She started her career with the movie “Pink” in India, which starred Amitabh Bachhan. She performed the song “Kaari Kaari.” It was a noteworthy accomplishment for her to be nominated for this song in the “Best Female Playback Singer” category at the Filmfare Awards. 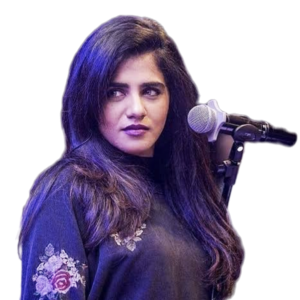 She made her first Coke Studio appearance in 2011 for Season 4 and worked with the Jal Band for the song “Panchi.” After that, she returned in 2015, this time with Umair Jaswal and their music, “Sami Meri Waar,” captured everyone’s attention.

Her third Coke Studio project, following Panchi and Sammi Meri Waar, is Baliye (Laung Gawacha). She was once again praised for her vocal skills, which was evident in a more pronounced way than in the previous two songs. A list of her coke studio songs is as follows:

After her popular “Humsafar” OST, she appeared in the soundtrack for the A Plus television programme “Dhamak”, “Judai” & Mann Mayal OST on ARY Digital and the OST for the dramatization “Behkawa” on Geo Tv.

In 2011, Quratulain Baloch was the recipient of Pakistan’s Youngest Achievement Award UK for “Woh Humsafar Tha” (Humsafar Drama). Since then, she has earned a lot of recognition.

How To Book and Contact Qurat Ul Ain Balouch for Events?

Qurat Ul Ain Balouch is available for Evens and Concerts and is very easy to be approached and Booked for Events with Fankar Online.

How much does Qurat Ul Ain Balouch charge for a show?

Female Singers
Mehwish Hayat is one of Pakistani Showbiz emerging and leading actresses, known for DRAMAS Bin Tery, Kabhi Kabhi, Mann Chalay, and as much as her beauty. Mehwish Hayat age is 31 (ATM) and was born in Karachi, Pakistan, on January 6, 1983.She won an award from a UK Magazine before getting the success she have today. She is also Model and Singer with a beautiful voice. she is singing in coke studio latest songs. Contact Mehwish Hayat [chat]
Read more

Female Singers, Bands
Manwa sisters a group of three sisters start there work in music from the college life. “We chose the word Manwa because that (literal meaning of the word in Urdu) is what we want to do. We want to get our talents recognized.” told by Maryam Jabeen, One of the members of this group.
Read more

Female Singers, Sufi Singers
Sanam Marvi is a sufi and folk singer her background is related to folk singing. Sanam marvi made her live concert singing. Marvi performs sufi concerts around the world. Pakistani television series featuring live music performances to Marvi she sing a song from the heart of soul with beautiful voice. She sung in different languages Urdu Punjabi.
Read more

Female Singers
Natasha Khan was born in Islamabad and based in London. She write and compose songs with her mom as an audience. She is the first qualified female audio engineer from Pakistan. Natasha also sings in Coke Studio music seasons.
Read more

Female Singers
Farah Anwar start her Career From Ptv Lahore In 2008 she sang Two Song As Solo Singer In Pakistan Virsa Pro Gramme. After Virsa. she Join The Company Of Mian Yousef Salah Ud Din As Female Vocalist And Sung Two Songs In Virsa Two But The Songs Are Duet With Ali Abbas And Nadim Abbas Loonay Wala In This Scenario she Got Offer To Sing  Songs.
Read more

Female Singers
Meesha Shafi touched modeling first which have highest ranked in film industry After she connected with the singing world and now the most soul touche voice in the very first sing a song in coke studio with collaboration of Arif lohar (JUGNI) She sang a rendition of the folk song "Chori Chori" which also was highly viewed. Meesha have build their career in singing highly form. she is live singer. the most famous song is (Sun ve balori ankh waliya). Meesha is not only sing a urdu, she sing in different languages, Punjabi Urdu Pashto and Sindhi.
Read more

Female Singers
Nooran Lal  is a Pakistani singer. She is very popular singer. She started her music career in 2001 from Pakistan Television. “Mahi Ve Sanon Bhool Na Javi “ that is sung by Norjahan. Which she recorded in her voice at Pakistan Television. Public liked it very much. Her songs are very famous on stage and stage dancers used to dance on them. Nooran Lal is adorable singer.
Read more
close