Manwa Sisters
Back to products

Hadiqa Kiani is a Pakistani female singer, philanthropist, and songwriter. Hadiqa was born in Rawalpindi (city of province Punjab, Pakistan) as the youngest of 3 siblings, her older sister Sasha and brother Irfan Kiani. Her father pass away when she was 3 years old. Her mother, poet Khawar Kiani, was the headmaster of a govt girls’ school. Seeing her musical skills, Khawar enrolled Kiani in the Pakistan National Council of the Arts. She received the early education in music from Madam Nargis Naheed.

She has received many international and local awards and also has performed at the most reputable venues in the world, including The Kennedy Center and Royal Albert Hall.

Hadiqa Kiani is a well-known celebrity who demands no introduction. Her beautiful singing voice has earned her a unique and distinguished niche in the music industry over many decades. She is an accomplished musician, composer, songwriter, and humanitarian. Her performances are heard at some of the most famous venues worldwide, including the Royal Albert Hall and the Kennedy Center.

Hadiqa is also expanding her salon business to new locations. Additionally, she was awarded Tamgha e Imtiaz for her musical achievements. She’s a woman who has twice brought honour to Pakistan.

Rawalpindi is the city of birth for Hadiqa Kiani. Her father passed away when she was three years old. The poetess Khawar Kiani (her mother) was the headmistress of a public school for girls when she was growing up. Khawar recruited Hadiqa after hearing her sing and decided she would be an asset to the Pakistan National Council of the Arts. Nargis Naheed was her early music instructor.

Hadiqa travelled from her hometown of Rawalpindi to Lahore when she was 13 years old to continue her classical studies with Ustad Faiz Ahmed Khan and Wajid Ali Nashad. She received degrees from Pakistan’s most prestigious universities, the Kinnaird College for Women University and the Government College University Lahore.

Since Sargam however, Hadiqa has been mostly away from playback singing in Pakistan. The exception came in 2011 when she became one of the main playback singers for Shoaib Mansoor’s film Bol Pakistani film. The film featured 4 of Kiani’s songs, two of which were teamwork with Atif Aslam. The soundtrack of the film saw positive reviews and received 4 Lux Style Awards nominations for Hadiqa Kiani and Atif Aslam.

Pakistan Idol is a reality singing competition of Pakistan that is part of the Idols franchise created by Simon Fuller and owned by FremantleMedia and 19 Entertainment. It was developed for the entertainment market of Pakistan by Geo TV. The show brought together Ali Azmat, Bushra Ansari, and Hadiqa Kiani. The first season of the show was massively controversial but proved to be the most watched entertainment show in the history of Pakistan. 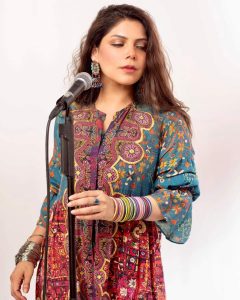 In the early ’90s, Hadiqa hosted a children’s music program called ‘Angan Angan Taray’ on television. Throughout the show’s three-and-a-half-year run, she and co-hosts Amjad Bobby and Khalil Ahmed sang over a thousand songs for youngsters. Kiani’s performance on this show was so impressive that PTV promoted her to the “A+ artist” level. She was a video jockey on NTM’s Video Junction, music charts show.

Hadiqa Kiani began her career as a playback vocalist in the early 1990s. Her first major film was the Pakistani smash hit Sargam, which starred and was scored by Adnan Sami Khan.

Hadiqa Kiani has been performing since 1996, when she published her first album, Raaz (Secret). Additionally, after former pop singer Nazia Hassan retired, she was the first female vocalist to release a pop album. The popular Kashmiri folk song “Maane Di Mauj” showcased her multilingual vocal abilities.

She released her second album in 1998, “Roshni”. The third single released from the album “Roshni” was “Dupatta.” This song ranks number fifteen on Pakistan’s list of the 20 Greatest Pop Songs of All Time. Due to Dupatta’s popularity, Hadiqa was soon recognized as the best female singer in the country.

This album’s sixth song, “Boohey Barian,” became an even more significant hit than “Dupatta”. Today, “Boohey Barian” is regarded mainly as Kiani’s finest solo effort and as one of the most iconic Pakistani songs. Roshni has gone platinum in Pakistan due to sales of over a million copies. It has been ranked fifteen on the country’s top twenty best local pop albums. One of only two female singers on the entire list, Hadiqa is in rare company.

After then, she recorded many more albums, all of which became massive successes.

Hadiqa Kiani as an Actor

Hadiqa has made guest appearances in the drama series “Udaari” and the film “Bol”, but she shocked everyone by making her acting debut in 2020. She shared the screen with Noman Ijaz, Sania Saeed, and Iqra Aziz in the well-known television series “Raqeeb Se.” Later, she was seen performing a stunning opposite of Bilal Abbas in the drama “Dobara.”

Hadiqa’s growing fame was emphasized in January 1997, when she made history as the first Asian singer to appear on the British National Lottery Live BBC One, which an estimated 16.6 million people watched. Following those two programmes, she toured the United States for the first time in 1997. She had already worked with Bally Sagoo on two additional BBC and ITV programmes. On her tour of the United States, she was scheduled to visit fifteen states and a few Canadian cities. In the same year, Hadiqa participated in various international competitions in the United Kingdom, Australia, and China.

Hadiqa Kiani was the sole Pakistani performer on the “Celebration Hong Kong 97” event at Happy Valley Race Course, an event honouring Hong Kong’s independence from the United Kingdom. Hadiqa Kiani made history in Hong Kong by becoming the first popular Pakistani vocalist ever to perform.

It wasn’t until the year’s end that she made history as the first Asian female vocalist to be signed by Pepsi-Cola International. After signing Gloria Estefan, she became the second female international performer to join the label.

Hadiqa Kiani collaborated with local Pakistanis and the Pakistan Army in August 2010 to offer clothing, water, food, and shelter to Pakistan’s flood victims in the wake of that country’s terrible floods. She also participated in the fundraising telethon Pukaar on Geo Tv with pop sensation Ali Zafar. Hadiqa personally distributed supplies to the affected people during his visits to the Multan Relief Camp, Basti Kalraywala, Muzaffarabad, and other flood-affected districts in cooperation with the Pakistan Army.

Hadiqa recorded the 1999 Cricket World Cup anthem in 1998. Kiani’s mother, Khawar Kiani, penned the lyrics for the Pepsi-sponsored song, Intehai Shauq, while the legendary Nizar Lalani was responsible for the music production. The music video, directed by Jami and Imran Baber, became an overnight sensation because of the song’s inspiring story and message.

Her first appearance on Coke studio was in 2012 season 5, when she sang a few songs, including “Daachi Waaliya” and “Kamlee.” Audiences seemed to enjoy all of her Coke studio offerings.

Hadiqa has performed the theme music for numerous Pakistani television programmes. In 2012, she sang the theme song for the popular television drama “Zindagi Gulzar Hai.” The song was viral at the celebration. Later the same year (2016), she sang the Ost for another hit drama serial, ‘Udaari,’ which also garnered much attention and appreciation. She has also participated in other title tracks, repeatedly demonstrating what a fantastic singer she is.

Hadiqa Kiani has performed at some of the most prominent locations in the world and has won numerous national and international honours. She was given the Tamgha-e-Imtiaz, the highest civilian award in Pakistan, in 2006 for her work in the music industry.

Her accolades consist of the following:

She has an endless list of songs. Some of them are:

How To Book and Contact Hadiqa Kiani for Events?

Hadiqa Kiani is available for Evens and Concerts and is very easy to be approached and Booked for Events with Fankar Online.

How much does Hadiqa Kiani charge for a show?

Female Singers, Folk Singers
Afshan Zaibi is the Famous, Multi talented singer with portfolio in Urdu, Siraiki, Punjabi, Pashto, Hindko.  She  has  got  PTV Tallent Award in 2011. Some of her’s famous albums are Jhoom Barabar Jhoom, Yari Lanri Aey. She is one of them that are spreading the  Pakistani culure with their songs and voice.
Read more

Female Singers
Hina Nasrullah is a promising young singer from Lahore. She started as a naat-khwan (someone who recites hymns in praise of the prophet) since childhood, from Pakistan Television in programs Aangan Aangan Taaray, Music Room, and others. She was a student of Punjab University, Lahore later on. Her ambition is to make a name in Hamd o Naat and Sufiana Kalam.
Read more
close