Aima Baig shares about her weirdness in her childhood. She says that she was not a child who used to play with barbie dolls but she had some weird stuff to play with.

Aima told that she used to play with a wooden plank instead of dolls and all girly stuff. I used to draw eyes, face and hair on that piece of wood. It was a companion for me that I had all my childhood. She added, “I never liked dolls and used to break them. I used to be a weird kid, but now it has revolutionized.” She expressed that, “my mother threw that plank on roof top and it got spoiled due to rain. I was so angry because I thought my world has ended. 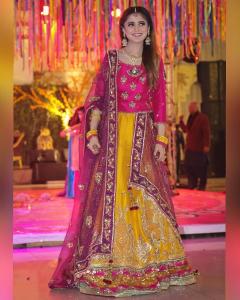 She responded to a question that I fall in love everyday. She expressed that her mother did her masters in English so she kept on correcting us. Therefore, I used to sing and listen to English songs.

She shared that her mother supported her for singing but her father did not. Because he did not want me to sing as I was the youngest child. I started singing when I saw my elder sister reciting Naat in School. Therefore, I got attracted towards it and tried to start singing. But in fact, I was too shy to sing in front of my father.

Aima Baig was born on 10th of March, 1995. She is a Pakistani singer, songwriter and scriptwriter. She got her fame from her singing in movie, ‘Lahore Se Aagey’ and a private channel show, working as co-host from 2015 to 2017. She sung a cover of “Summer Wine” with TV host Mubashir Lucman, is her uncle too. She has written the script for his next movie as well.